In the lead up to our Summer Rock School, Sheargold Music have begun a blog project to showcase some of the most inspirational, talented, and legendary musicians from around the world. For the next few weeks we will be running through our favourite artists, bands and composers, giving our reasons as to why they are true legends in music. 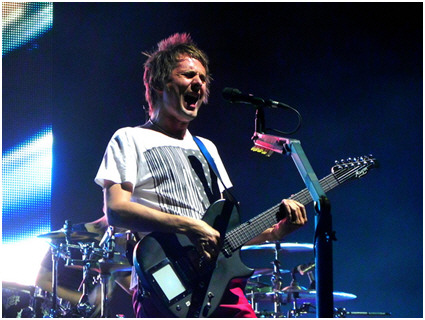 You know those people who just seem to be able to do everything ridiculously well without really looking like they are trying? You know, the people who can pick up an out of tune instrument and near enough compose an astounding piece of music? Well, Matt Bellamy is certainly one of those people, with his extraordinary piano and guitar playing ability, and his truly amazing vocal range.

Matt started playing piano at an early age, and would often learn songs and television theme tunes through listening to them and repeating them back. He began learning the guitar a few years later and after moving to Teignmouth, Devon met up with future band mates Dominic Howard, and Chris Wolstenholme.

Matt is the driving force behind Muse, and he wrote and composed all of the songs from their 1999 debut hit album ‘Showbiz’. We remember listening to this album and being blown away by the masterful piano introduction of the opening track ‘Sunburn’, whose arpeggios were a sign of the road ahead for the band. 2001’s ‘Origin of Symmetry’ marked a massive step up for the band in terms of musical creativity, and Matt certainly showed off his classical roots and his Rachmaninov inspiration in the piano-heavy ‘Space Dementia’.

Matt has often pushed the boundaries of his own musical style, never truly conforming to one set formula for his song writing. Evidence of this is apparent in pretty much every album that Muse have released, but can be really noticed on 2006’s ‘Black Holes and Revelations’ album, when the rock music took a decidedly R&B turn on their hugely popular ‘Supermassive Black Hole’ track, then mashed together Spanish flamenco guitar with grandiose classical pianos on the penultimate track ‘Hoodoo’.

It was in 2009 that we really started to see the scale of Matt’s musical vision, when ‘The Resistance’ was released. From epic rock anthems like ‘Uprising’ and ‘Guiding Light’, through to the R&B funk of ‘Undisclosed Desires’, Muse had cemented themselves as a force to be reckoned with in the music industry. We were most excited by the final three tracks of the album, which formed one amazing composition called ‘The Exogenesis Symphony’. Matt had been developing this symphony for many years, and it was certainly worth the wait; sweeping orchestral movements, laced with distorted guitar riffs, soaring vocals, and overblown arpeggio pianos – a work of a musical genius.

It has recently been announced that the sixth studio album from Muse is due to be released in September 2012, and a teaser trailer has been released which provides a brief glimpse into the musical direction of the band. We’ve listened to it, and have to say that it is sounding interesting to say the least. We’ll not give anything away, but we are really excited about getting a full listen to the album!

Matt has a huge amount of equipment in his arsenal, and it is in the live arena where he gets to showcase his musical skills to the public. Aside from playing his now legendary Manson custom guitars, Bellamy also makes use of Kawai digital pianos preferring the MP-8 or the ES-6. Sheargold music stock a huge range of Kawai pianos and keyboards including the predecessor to the MP-8, the Kawai MP9500 digital piano. We’d love to see Matt down in our showroom and playing some of his compositions on our Kawai grand pianos – consider that an official invite Mr Bellamy!

There are so many great songs in the Muse repertoire that it is difficult to list just a few, however we have decided to list some of our favourite defining examples of Matt’s legendary musical abilities:

Arguably the defining moment when Muse became one of the most exciting live bands on the planet, this performance exhibits Bellamy at his falsetto mad-scientist best – just wait until he shows off his incredible sideways moonwalk!

Not content with having to switch between guitar and piano, Matt plays this song on his Keytar – that’s right, a keyboard in a guitar!

We hope you have enjoyed this Music Legends post. If you would like to find out more about our own Summer Rock School or to book a place please click here. Alternatively you can contact us for more information on services and products.